The SCLC and the Birth of SNCC

The SCLC and a Clash of Leadership

In 1957, Ella moved to Atlanta to help Dr. Martin Luther King Jr. and Bayard Rustin organize the Southern Christian Leadership Conference (SCLC). Baker was put in charge of founding the Atlanta office, and referred to herself as the “social architect” of the organization. Ella ran the voter registration campaign of the NAACP, called the Crusade for Citizenship. During this time she also worked with the Young Women’s Christian Association (YWCA) throughout the South to push for school integration.1  2

Similarly to her experience at the NAACP, Baker grew irritated by difficulties in coordination and organization at the SCLC. She also found the competing, authoritative leadership styles of MLK Jr. and other black male ministers frustrating and counterproductive.  Ella served two terms as Acting Executive Director for the NAACP, but she continued to clash with MLK Jr.2 She found the famous leader too controlling and not empowering enough. As Ella explained, “I wasn’t one to say yes, just because [an idea] came from Dr. Martin Luther King, Jr. I was not an easy pushover… It’s a strange thing about men,… if they haven’t ever had a woman say no to them, they don’t know what to do sometimes.”3 As Professor William Chafe of Duke University notes, Ella called leaders like King “prophets with feet of clay”, that did not bring the movement far enough by inspiring others. Watch Professor Chafe explain Ella’s significance as the Mother of the Civil Rights movement below.

The Birth of SNCC 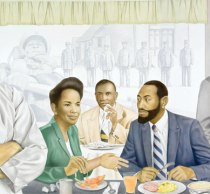 It all started with a sit-in: On February 1, 1960, students from NC AT&T University refused to give up their seats at a Woolworth’s lunch counter in Greensboro when they were denied service. Dr. King traveled to North Carolina to give a speech to the Woolsworth students, but Ella felt that just speaking to them was not enough. The incident caused her to leave the SCLC, as she wanted to help emerging young activists like those of the sit-in develop their own leadership. As activist Rosa Parks explained, “[Ella] felt that the men [like MLK Jr.] wanted all the glory. And she was going to be working behind the scenes, and she wanted her just deserts… but they weren’t about to give it to her, and so she decided that she couldn’t take it.”4

Ella organized a meeting for student activists to congregate at Shaw University, her alma mater, in the summer of 1960. She aimed to bring student groups from throughout the South together and have them accomplish more than disjointed efforts, and over 300 students attended the first meeting. From this meeting, the Student Nonviolent Coordinating Committee (SNCC) was born.5

One of SNCC’s first promotion posters. SNCC was Baker’s brainchild to spark activism in the youngest generation.

A collection of Baker’s own pins, demonstrating her work with the SNCC organization.

The creation of SNCC exemplified Ella’s desire to not just lead a movement, but to create group-based leadership. As she noted, “I had always considered that my role was to facilitate”3 and SNCC allowed her to do just that. She trained students to fight for social activism themselves, and to travel the rural South spreading these messages of change. She acquired the nickname Fundi from her leadership at SNCC; a Swahili word meaning a person who masters a craft with the help of the community, practices it, then teaches it to the next generation.3

Ella was very focused on using voting as a primary tool of insurgency and mobilization. SNCC continued to meet and grow throughout the summer and fall of 1960, and partnered with the Congress of Racial Equality (CORE) to organize the 1961 Freedom Rides. In 1964, SNCC held the Freedom Summer, which was an effort to focus national attention on the racism in Mississippi, and to register black voters in the state. Also in 1964, Ella helped organize the Mississippi Freedom Democratic Party (MFDP) to challenge the traditional Deep South culture of Mississippi politics.6 From 1962 to 1967, Ella also worked on the Southern Conference Education Fund (SCEF) — an interracial organization that aimed to bring black and white persons together to fight for social justice and human rights.7

Sources for this page: