Involvement in the NAACP 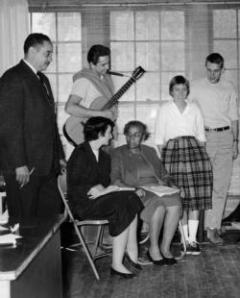 A meeting with Thurgood Marshall, Septima Clark, and others at the Highlander Folk School.

In 1929, Septima Clark moved to Columbia, South Carolina for a higher-paying teaching job.  While in Columbia, she became involved in many community organizations, taking part in interracial meetings and the NAACP.  When she joined, the NAACP was working to equalize the pay of African American and white leaders. Clark considers it her “first ‘radical’ job” and her “first effort in a social action challenging the status quo”.1  She worked alongside NAACP lawyer Thurgood Marshall, and helped successfully get the equalization law passed.  This legislation had a direct effect on Clark’s own income as her salary tripled once pay was equalized. This experience convinced Clark to return to school to continue pursuing her own education.2

Throughout the 1930’s, Clark took night and summer classes in Columbia, as well as in New York and Atlanta.  In 1942 she earned her Bachelor’s degree from Benedict College in Columbia.  Four years later, she completed her Master’s degree at Hampton Institute in Virginia.3

Clark taught in Columbia between 1929 and 1947, and remembers learning patience through working on interracial committees during this time.  She once was in a meeting with the Mayor of Columbia and two white women, and the mayor ignored her comments because she was black. Clark accepted situations like this as part of a larger struggle. In 1947, she moved back to her hometown, Charleston, South Carolina, to take a teaching job there. She worked to get more African American teachers in Charleston through the NAACP, saying, “we got to the place where we felt that we needed to have black teachers teaching in the schools, because that was quite an injustice.”4  In addition to teaching, Clark continued her civil rights activism and community involvement in Charleston.  She had a leadership role in the YWCA (which was still segregated), and was a member of the Charleston Federation of Women’s Clubs, the Metropolitan Council of Negro Women, and the Alpha Kappa Alpha sorority.1

In 1954, the Brown vs. Board of Education legislation passed, desegregating schools and requiring teachers to list organization affiliations. When Clark listed the NAACP, she was fired from her teaching job.  She maintained NAACP membership, as it was a prized part of her life and accomplishments.  In 1956, South Carolina passed legislation barring public workers from being a part of Civil Rights organizations.  Septima tried to mobilize other teachers to petition this law with her, but was unsuccessful.  She lost her job and pension for twenty years, until it was restored in 1976.2

Sources for this page: